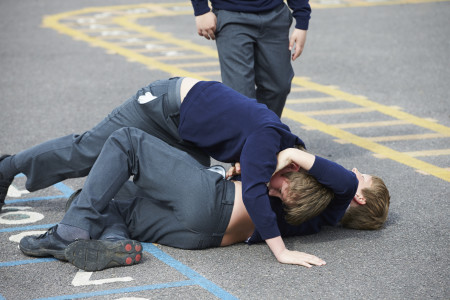 It was 10 PM on a Saturday night, and I was walking on the street near the Boston College campus to pick up a slice of pizza. Out of the front door of a local bar, spilled nine young men noisily. Seven of them beat the other two to the ground.

The beating became animalistic and savage within seconds. The men on the ground, already bleeding were having their clothes torn to shreds and being repeatedly kicked in the head. One man lost his shoes, and there was blood everywhere.

There was no sign in the pack mentality of these young men of letting up.

I felt like I needed to do something or the guys on the ground were going to die. But even with a couple of decades of martial arts experience, I knew jumping in with seven drunken, aggressive guys probably wouldn’t turn out so well.

I pointed directly at a man standing in the door of the pizza shop and said, “go inside and call 911 right now.”

I approached the fight, being careful to stay way out of range. I stood and used my voice as if I was the assailants’ best friend, “Hey guys, the cops are right around the corner, you’d better get out of here like right now.”

The guy closest to me stopped for a second, “but, this guy punched my friend.”

“Oh yeah absolutely, but you don’t want to get busted.”

“C’mon, let’s go!” He gathered up the rest of his friends and took off. I waited with the two men on the receiving end until the ambulance showed up. I never saw a police officer or vehicle.

My friend Chris asked about when it was OK to intervene in some kind of assault. So, this post is meant to address that. I hope it’s helpful, but I mostly hope you never need it.

Intervention can be dangerous

That situation above worked out for the best. It’s one of the proudest moments of my life – without violence I was able to keep my wits and make the situation better.

Others have not fared so well. I remember the case of a man in Boston getting between a man and a woman fighting in Boston. He failed to see that the man had a friend who retrieved a baseball bat from his car. He was lucky to survive with brain damage and missing teeth.

Others have been less lucky.

Let’s be clear, if you intervene physically in any kind of altercation – you are putting yourself at unseen risk.

As a society we want people to step in when we’re in danger. It’s one of the things about being social creatures. And many of us, myself included, have the feeling – I must do something – when we see a fellow human being in danger.

It’s clear to me that watching out for your neighbors is strong value in Mainers. I’ve seen it recently when no less than a dozen of my neighbors assisted with a car accident recently – helping direct traffic, call for help, and take care of the injured until help arrived. I remember when people in my mother’s community pulled together after the ice storms in 1998.

So, it’s actually a pretty difficult thing for me to give you a set of rules or some easy answer about when to intervene in a situation that may be dangerous to you. Every situation is very different. Instead, I want to give you some things to think about, and then give you some ideas for intervening safely.

Ultimately the decision to step in is up to you. The more you think about your own values and capabilities in advance, the more likely you are to make good decisions.

Is there a disparity of force in play?

Is this an adult using violence against a child, someone who’s disabled, an elderly or special needs person? Does it appear to be a domestic dispute? In these situations, the person is at special risk, may not be able to defend themselves, and may not be able to seek help.

What’s the nature of the Incident?

An unprovoked attack or a robbery may be a different situation than two angry guys who’ve been drinking. Is the situation escalating? Do you have an idea about what led to the incident?

You’ve come upon a dangerous situation involving violence or the threat of violence. You’ve decided you must do something. How do you step in? The obvious, most simple answer is to intervene in a way that minimizes the danger. Here are some thoughts:

Lead with your voice from a distance

If you can stay out of harm’s way and stop a bad situation, I call that a win. Holding up a cell phone from a safe distance and saying, “I’ve called 911 and now I’m recording this.” May work even if you haven’t had time to do other. Just be aware if someone turns their attention on you. This leads me to my next point:

If you have to run, or grab the person being assaulted and run, where would you go? If the assailant decides to bolt, where are they likely to go?

Watch for friends and weapons

In self-defense training we say that there are only a few safe assumptions. Two of those safe assumptions are that the assailant is probably armed, and probably isn’t alone. If you’re within arm’s reach and someone pulls a knife the situation can turn deadly quickly.

Shielding is a great all-around self-defense strategy. Cover refers to putting something between you and an attacker that prevents the attack – like a building or a vehicle. Concealment is anything that obstructs an attackers view, making it harder for him to attack. Cover is preferred, but concealment is helpful too.

Place anything you can between you and the assailant. Run for cover when practical to do so. Think about trying to punch someone after they throw a blanket over your head, or trying to grab someone who is poking you with the end of a broomstick.

The same skills you’ll use to save yourself from danger are useful in helping others. Personally, I believe everyone should have at least basic self-defense training. It’s like a smoke detector – hopefully you’ll never need it, but if you do, you’ll be grateful you had it.

John Moore is a Maine native who overcame congenital physical limitations to achieve a 3rd degree black belt in jujutsu. He holds two master's degrees, and is a nationally certified crime prevention instructor. John teaches martial arts and self defense in the Portland area

This blog has been archived

This blog has been archived and is no longer being updated.